Home » Archives » Bach Flowers » Where Can You Buy Patience?

I’m jumping forward on our Bach-flowers’ list because I’m impatient to present to you this remedy: Impatiens. Also called Touch-me-Not, this flower helps one to be more patient. So if anyone was wondering where one can buy patience, look not further than this Bach flower!

It is, as its name suggests, the remedy for impatience and the frustration and irritability that often go with it.

Anyone can get into this state of mind, but there are also genuine Impatiens types, who live life at a rush and hate being held back by more methodical people. To avoid this irritation they prefer to work alone: the Impatiens boss is the one who sends staff home early so she can get the job finished quicker.

The remedy helps us be less hasty and more relaxed with others.

It is also an ingredient in Dr Bach’s original crisis formula, where it helps calm agitated thoughts and feelings.

In the Words of Dr. Bach

Those who are quick in thought and action and who wish all things to be done without hesitation or delay. When ill they are anxious for a hasty recovery. They find it very difficult to be patient with people who are slow, as they consider it wrong and a waste of time, and they will endeavour to make such people quicker in all ways. They often prefer to work and think alone, so that they can do everything at their own speed.

– The Twelve Healers and Other Remedies 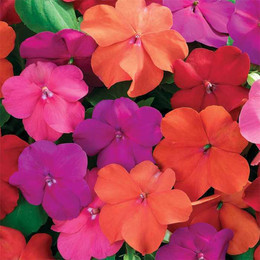 More About the Plant Per Se

Impatiens is a genus of more than 1,000 species of flowering plants, widely distributed throughout the Northern Hemisphere and the tropics. Together with the genus Hydrocera, Impatiens make up the family Balsaminaceae. Common names in North America include impatiens, jewelweed, touch-me-not, snapweed and patience.

A Case in Point

This is the case of a ‘mum-to-be’ who was becoming very temperamental during the last stage of her pregnancy. She lived in a remote area and it was her first child.

It seemed that she was very irritable with everyone around her and found herself shouting and becoming difficult to be with. Nobody could do anything to satisfy her and she was in a hurry for the baby to arrive so that she could get on with her life. Impatiens was the only remedy needed.

It happened that two days later the weather forecast was pretty grim and it seemed that heavy snow was on its way. The hospital decided that P should book in at once, otherwise it might have meant that a helicopter would have to be used when her labour started, in order to get her to the hospital.

Once she was in the hospital the staff there decided to induce the birth. But each time the day came for the procedure to start another mum-to-be arrived at the cottage hospital, in full labour, who obviously had to be seen to first. Day after day went by and in the end it was a full ten days before the staff could get around to inducing her baby. How did this impatient, irritable mother cope with the delay?

Her family, the nursing staff, and P herself, were absolutely amazed at her patience and good humour. She laughed each time another mum was brought in, and she was pushed once more to the back of the queue. They praised her, and she became a talking point among the staff. She told them her secret – Impatiens!

For What Kind of Children?

For kids who are nervous or impatient, or who get bored easily. For the very active child who cannot stand still.