Home » Archives » Zoom on Systems and Organs » What’s in an Ear?

You’ve probably heard of points on the foot, that can connect to different organs in the body. That’s a science in itself – reflexology we call it. By the way, it’s not yet offered as a therapeutic course at the AMCC. Maybe you should suggest the idea to our director (he doesn’t usually read the blog post. I could be wrong.)

So back to our topic – the Ear. As you probably know already, there are also points of the ear in order to treat different organs in the body. I wonder if someone can work both on the ear and on the foot at the same time, for the same organ. You’d probably need two different people, unless the patient can bring its foot next to the ear. 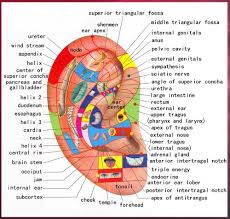 As you can see, there’s a lot going on in a simple ear. and that’s just one ear. Since we have two, you double the number of points.

Why am I talking about ear today? Because I often see on my baby’s ear a spot, sort of like a small, tiny, blood spot – on the ear. Once or twice you can ignore it but it’s pretty frequent. So I’m thinking – hmmm, maybe there’s something to it? I heard about those points, so I looked into it more deeply. I still wouldn’t venture and say: “oh, it’s his liver. He has a liver problem because the spot appears on the liver point.” But it seems that’s how this game works. Am I wrong? So I probably should go see an ear therapist. I haven’t yet found one, it’s not so frequent. And I’m not sure my pediatrician would go along with that kind of therapy. I could try and see his reaction but I could imagine it would be something like – a blank face.

So what it’s an ear? As I mentioned, it’s a lot of points with a lot of different connections to the rest of the body. Actually, it first goes through the central nervous system, so you can cure a whole lot of stuff with either needles, fingers or electrical devices.

What Can You Cure With Auricular Therapy

Yes – auricular therapy – that’s the official lingo. You can learn online that squeezing your antihelix section of the ear (the middle ridge) can help you to get relief from tension headaches. The crescent-shaped crus of the helix can bolster the digestive system. I could not believe my eyes when I read all the diseases this therapy can cure! It’s even integrated as part of group meetings for drug addicts! Can you imagine the picture?

So let’s shorten the exercise. Here’s what you CAN’T cure with auricular therapy: congenital faults (hard to manipulate DNA from an earlobe), major mechanical defects, cancer, degenerative diseases and diabetes. Everything else, you just hand-in your ear, so to speak, and let yourself be acupunctured! By the way, we do offer an acupuncture class online. It’s the theoretical part, of course, and it’s called Bio-Energetics. Because every point counts.

If you liked this article, you’ll probably also enjoy: