Spices seem to have all sorts of effects, including controlling sugar cravings. Do we ever know? We had nevertheless written an article Sugar No More, which explained that to stop sugar (already there it reduces cravings) everything starts in the HEAD… you have to be re-brainwashed that white sugar, refined, even brown sugar, does not bring you anything and keeps you locked in a vicious circle of junk addiction.

But for those who like intermediate stages, or who still can’t move on to that land of freedom, here’s an alternative. 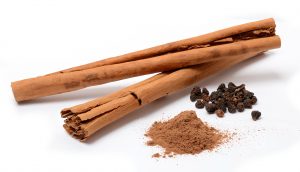 The Power of Cinnamon

Did you know that cinnamon is considered the oldest spice?

She is from Ceylon, the old name of Sri Lanka.

Another crunchy piece of info: Cinnamon stick comes from the bark of the tree that has curled up as it dried.

Beware of Chinese imitations! 90% of cinnamon on the market comes from a version of cinnamon that is toxic to the liver, this is the Chinese version to be avoided at all costs. Check the labels carefully…

We will see later the benefits of cinnamon in essential oil but at the level of the powder as such, here are some interesting facts:

HOW TO CONTAIN YOUR DESIRES FOR SUGAR WITH CINNAMON ESSENTIAL OIL?
Cinnamon essential oil contains active elements that act on our limbic system to block our sugar cravings. The molecules it contains will land on the limbic system (area of the brain responsible for pleasure, emotions, etc.), which will have the effect of emitting or preventing the emission of certain hormones. This results in a significant reduction or even disappearance of the feeling of hunger. Cinnamon essential oil can therefore be very useful to stop during a lunch or to channel these nocturnal nibbling urges.

By ingestion
You can prepare an herbal tea or a tea to which you will add a few drops (1 or 2, no more) of Cinnamon essential oil, previously placed on a spoon of honey. Drink your preparation: your attraction to sugar should disappear in a few moments.

Inhaled
Another idea to overcome the feeling of hunger would be to compose your little cinnamon-scented box. All you need to do is bring a box, place a cinnamon stick, a vanilla pod, a few orange peels and flavor everything with a few drops of cinnamon essential oil. Then, as soon as you feel like snacking, open your box and calmly breathe in its scent. That should be enough to chase away your little sugar cravings.

Precautions for use
Cinnamon essential oil is particularly concentrated in active agents, and this is what explains its effectiveness. But it also requires taking some precautions when using it and being aware of its limits and dangers. Cinnamon essential oil should not be used by pregnant or breastfeeding women, or by children under 6 years old. Its pure use in all forms (ingestion, inhalation, diffusion and cutaneous application) is strictly prohibited. Since essential oils are not miscible in water, Cinnamon must be placed on a sugar or a spoon of honey before being added to an herbal tea or ingested. In order to take full advantage of the properties of Cinnamon essential oil, it is better to dilute it, most often to less than 10%, following the dosage conditions of the synergies.

About our Sugar Cravings

In order to better understand how Cinnamon essential oil acts on our body, it is necessary to understand where this love and this desire that arouses the sweet taste comes from. In fact, nature has made sweet taste a clue that the food consumed has benefits for the body and that it contains elements that promote human development and health. Our attraction to sugar would therefore come from the ability of some of our ancestors to appreciate this taste, which allowed them to survive and develop more easily. This behavior would therefore be the result of natural evolution. This phenomenon is all the more striking, since it appears from an early age. Indeed, even before the first food experiences, the baby feels a certain pleasure in the face of the sweet taste, while he grimaces when faced with the salty or bitter taste! These last two flavors being nature’s way of signaling a food hazard. Thus, it seems that during the evolution of the human species, the attraction for sweet taste (especially in fruits rich in carbohydrates and sources of energy for the body) constituted an adaptive advantage! The problem we know today is that the fruit is no longer the only source of the sweet taste. And unfortunately for us, not all sugars have the same value for the body! So to oppose this will (almost instinctive), we can use the essential oil of Cinnamon.