As part of our Phyto-Energetics course, the AMCC proposes to analyze the associations to be made between plants and the body’s energy system. This includes the notions of Yin and Yang, as well as the right plants to associate with pathologies. It is an introductory course but really a window to some pretty fancy and deep concepts.

With the help of our tutor Laure, we’ll try to figure out a bit of some connections.

The Example of Garlic Fire Yang

Garlic acts on the Fire element. After all, garlic is almost spicy one could say. So where does that go? The fire element is basically the heart and the intestine. + two additional meridians (Triple warmer and the Master heart.)

Let’s repeat: garlic is Yang because it stimulates, warms the organs and functions of the body. So we use it for the Yin Heart to restore balance, to stimulate in a positive, growing way.

The garlic can also stimulate the energy flow so that it happens naturally and normally, in a good way. We must therefore see Garlic as a complement to return to balance. Who knew there was so much depth in garlic? 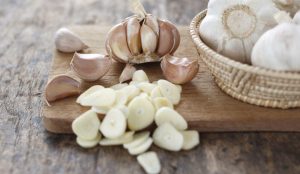 There must be enough Yin and Yang in everything to achieve a balanced energy balance. 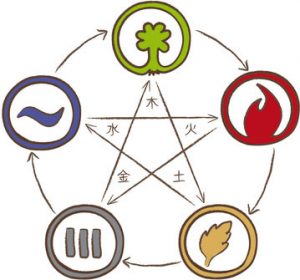 It is certain that if you consider the Yin plants as a remedy for Yang states and vice versa, you are not mistaken, but by limiting yourself to this notion you are doing a rather superficial job in the sense “which does not go into detail”. Whereas if you think in subtlety, you will find that ultimately a Yang heart may require a plant that acts on the Yang fire in order to improve the energy flow.

The alfalfa acts on the element Earth. 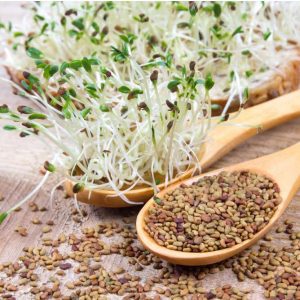 In addition, it will be used in the event of muscle strain – accompanied by contracture-type pain, stiffness. These signs indicate an imbalance of the organ Liver (Wood) Yin. The alfalfa will stimulate energy circulation and promote it in order to regain a balance.

Finally, it is used in the Yin heart states so that it stimulates energy in the right direction, warms and releases energy circulation.

With this example, we remain in the typical aspect of “I bring Yin to balance a Yang imbalance and vice versa”.

What Laure advises is to start with focus on the Yin / Yang aspect and the properties of each plant. For this you can train by

The plants used to rebalance this meridian are: cinnamon, mallow, ground ivy.

What’s the link between these plants and the return to equilibrium of the spleen?

The first thing to do is to take an interest in the symptoms and signs described by the client. Based on this you already have an idea of ​​the underlying dysfunction. Then, you need to move on to a suitable herbal remedy choice and narrow your choice based on the energy aspect.

For example, imagine a person who presents with flu-like illness: cough, sputum, fever. You can think of mallow which is a pectoral and emollient plant. However, this is indicated in the case of Rate Yin. It is known that flu symptoms are often accompanied by a feeling of cold and stiffness. This also concerns the path of the meridian in a diffuse way. You act from a pure phytotherapeutic point of view  (via the pectoral properties of mallow) but also on the energy level. In addition, you are told that the spleen works in conjunction with the stomach. It therefore plays a role in digestion in a more or less direct way. However, a flu-like state with sputum is colloidal waste that clogs the body. The digestive system is necessarily affected and so is the stomach.

Phyto-energetics is not an easy discipline and this course is to help you discover it- we think it is important to know this approach.  In addition, it is normal that you experience some difficulties: the discipline is complex and you are still, despite everything, at the beginning of training in alternative medicine. The experience and years of practice will allow you to better understand this discipline if it interests you. Indeed, not all practitioners use it. From Laure’s point of view, it’s good to have the basics because when you’re hesitating between two herbal remedies, you can often narrow down your choice based on what you have seen in this course.

To determine the origin of the problem in consultation, remember that you are taking a patient care as a whole. With your questions, you’ll come to understand who he is, what brings him to a consultation, what his symptoms are etc. That’s how you’ll find that some “traits” stand out more than others and you’ll know which plants to use first.

Liver cleanse for the fall