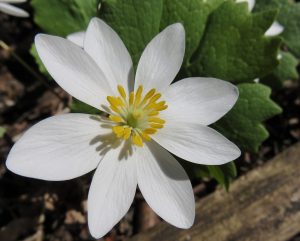 For this month’s theme, BLOOD, we got the homeopathic remedy Sanguinaria – “Sang” in French means Blood, hence the choice for this part of our series. As you can see, this flower doesn’t seem to fit the bloody type but don’t be fooled my friends! Those who need this remedy are warm-blooded and as you’ll see, there’s a lot of burning going on!

Here’s what E.B. Nash, one of the greats, used to write about Sanguinaria Canadensis:

Spigelia has the same kind of headaches, where the pain commences in the back, rises and spreads OVER the head, but in Spigelia’s case it settles down over the left eye.

For Sanguinaria patients, they want to be in a dark room and perfectly quiet (to deal with those bad headaches).

The Sanguinaria kind of cough usually comes on after a severe bronchitis or pneumonia (what we homeopaths would call the etiology, or the cause, VERY important).

According to E.B. Nash, the higher potencies are more efficient in these cases (200C). Sometimes indicated after Sulphur and Lachesis have failed, especially if the circumscribed redness of the cheeks appears.

Who else has headaches on the right side?

One study shows that this remedy is used successfully to treat menopause symptoms, such as hot flushes.

Another known application for Sanguinaria is

We should also see the following signs in a case of menopause for this remedy:

But we don’t need to have all the symptoms at once.

We can also use Sanguinaria in bad coughs with the following signs:

Burning and stitching in chest, lies on back, sputa tough, rust-colored and difficult, pulse quick and small, circumscribed red and burning spots on cheeks, worse in the afternoon, extreme dyspnoea (that means waking up from bad breathing).

Neuralgia improved by pressing the head against a hard surface (floor for example). So if your client tells you “I feel much better pressing my head against the floor” don’t send him away yet for craziness – it could be Sanguinaria.

we also have a lot of right-sided symptoms like:

This is taken from Horvilleur’s book in French with nice flower pictures for every remedy:

Where does Sanguinaria candensis comes from? Yes you guessed right! Canada! 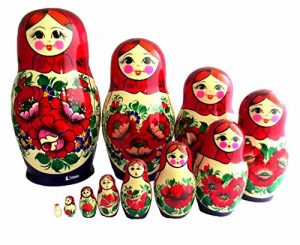 The plant actually produces red juice (from the roots up) hence its name. In conventional medicine, Sanguinaria has a lot of side effects, it is toxic and dangerous. But for homeopaths, we use it safely for inflammation of the respiratory mucous membranes, as mentioned hot flashes, and headaches. The main characteristic of this remedy is the cheek congestion, which are red like the russian dolls here featured:

If you enjoyed this article, you may also like:

Are You a Wood Person?