For this recipe (“healthy”?) – see previous article concerning this expression – I was inspired by a recipe taken on the net, but I do not remember where. In fact, I modified a lot of aspects of the recipe to give me a clear conscience regarding copyright. Although when it comes to recipes, copyright is limited …

So it’s officially a brownies, but given that with experience, the consistency was rather hard already at the dough stage, I opted to make dumplings. Hence the name of this new recipe, not really new I had seen it somewhere before I don’t know where. So it’s actually an amalgamation of two recipes from unknown sources, so really it’s the original.

In addition, I regularly make a brownie recipe whose ingredients are similar to this one (I’m coming to it) and so here is the third variation on the same theme “party brownies”. 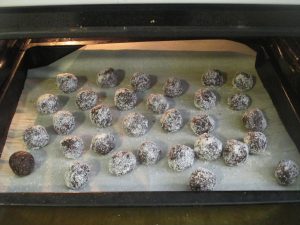 We normally put chocolate in a bain-marie (officially 50g, but I never measured – today I made 5 trips with my butter knife, between the bag of cocoa and the pan). With this chocolate (or cocoa if you prefer) we mix a 125g of butter – again I did in about it but the aluminum foil where the butter was indicates with a line every 50g, which helps.

So all in the double boiler, but I didn’t have one so I heat it over low heat in the pan. It shouldn’t be boiling, but since I was doing the rest of the recipe, it still boiled. I wanted to turn off the heat to return to the rest of my recipe but by mistake I put it even stronger, so for a w

hile it boiled twice rather than once. I don’t know if that makes a big difference.

So in a bowl we mix three eggs and 8 crushed dates. I would tend to cut them into small pieces (like when I make my date cake, another of my recipes) but here it said to put them in the blender (the dates, not the eggs). In a few seconds the blender creates a nice big ball that my children, if they hadn’t been to school, would have had a lot of fun tossing. Remember to remove the pits from the dates before blending, otherwise your machine will take a hit. We can also check that there are no bugs in it, incidentally (in the dates, not the machines).

To repeat: we have three eggs mixed with 8 dates in a ball, we add the butter and the heated chocolate. Finally, we sprinkle (say it how you want, but it’s basically to put the flour and the grated coconut in the dish.) The mixture has a good consistency, which inspired me to make balls instead of putting it in a brownie pan, as suggested. With the rest of the grated coconut (the package has 100g and you had to sprinkle 75) I roll my balls in the coconut, which reminds me of winter, snow and the holidays. Very thematic.

So there you have it for the holidays, a nice recipe of sprinkled coconut-choco balls – an original title not yet protected by copyright. As for the recipe, you will try it (perhaps your own way too) and tell me if you haven’t enjoyed yourself, the “healthy” version?

How many servings does that give? I don’t know, I didn’t count. But for some people it’s important to know so I took a picture, and to amuse the kidsduring the holidays you can make them count. I put an example of a dumpling not sprinkled so that we can see the before an

d after – just in case … You put it all in the oven, let’s say for a good twenty minutes, the time it takes to write this article.

As you can see on the picture, the end result is that the coco flakes which were white, become brownish after 20 minutes in the oven. But that’s fine, it’s also thematic with winter since the snow is not always so white, especially in the city.

How I Dealt with my Being Overweight