I promised you plants for this month, and of course the choice of subjects is varied, even unlimited! As usual, I focus on the subjects that fascinate me! Right now it’s homeopathy, you know, this science that heals according to the principle of “what caused harm can also cure it, in smaller doses!” One of the well-known remedies in homeopathy is Lycopodium, and it is the plant that we are going to visit today. 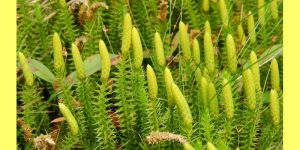 More about the Plant

For the little story…

Several thousand years ago Lycopodium clavatum was actually a huge tree, and over the years it has shrunk to a small fern – the lycopod. The main feeling in Lycopodium is that if the person stays small, their survival will be difficult, they will be humiliated, they will not be anywhere. The main theme of Lycopodium therefore becomes ambition, the desire to grow, a lot of effort that is fully focused on becoming bigger, being more powerful, reaching a higher position – the highest echelon. of the scale. (Raja Sankaran, the soul of remedies.)

More down to earth …

The lycopod (or wolf’s foot) is a creeping plant that grows on stony, uneven and covered soils. It looks like a large moss from which round peduncles rise, carrying at their ends two small cylindrical spikes composed of bean-shaped capsules. The spores that are contained in these capsules form the lycopod powder. This contains many mineral elements: aluminum, titanium, manganese, iron, copper, zinc.

Hahnemann was the first who had the idea of ​​crushing the lycopod powder and he discovered fine droplets of oil. He was a pioneer in no area, not just with this discovery: charcoal, cayenne pepper, and of course the famous cinchona. In short, here are the most common indications for Lycopodium: (PS you don’t need to have ALL these problems to use it)

Another specific symptom of Lycopodium: oyster intolerance (in the sense of poor digestion)

The Future of Nutrigenetics: Testimony of a Previous Student