The naturopath has generally two foes to deal with: Crystal, and her friend Glue. Sometimes one shows up in a patient, sometimes the other. We also have a bunch of tools to deal with each one of them, they’re all described in course Health Education #231. Feel free to register, it’s a bit over 600$. If you mention this article you get the registration fee for free! Let’s go back to our subject.

So how do you clean your body to get read of Crystals and Glues? And what are they, really?

Those two are signs of an intoxicated body. They show up when there’s an excess of something in your body. Let’s say… you ate too much protein-rich foods such as fish, meat, eggs or dairy. Could be. Why not? So an excess of those will cause the waste products (crystals in that case) to build up. They can also accumulate if you eat too much refined sugars and sweets – which is a more realistic case. Excessive acidic food is also a cause for cristal build-up and excess – but then again acidic food is the bottom line of almost any health issue. Everybody has an acidic terrain nowadays – the supermarket is full of acidic foods it’s very hard to not be a victim of acidity.

Glues come from a carbohydrate-rich diet of food grains, bread, pasta, as well as from excessive lipid consumption such as fats used for cooking. Long and poorly degraded starch molecule chains create glues. Mucus is generally the result of that.

How to Get Rid of Them?

The therapy used to treat glue-related diseases consists in drying out the source of glue through an adequate dietary reform:

For all crystal-related diseases, the basic therapy directly takes into account the characteristics of crystals.

Glues and Cristals: Disease or Symptom?

All catarrhs are glue-related:

So we’re talking about signs that give us the clue as to what the underlying problem is. Having a lot of mucus is not a disease per se, it’s a reaction from the body that serves as a signal: there’s too much of this or too much of that – get rid of it! Or buy a lot of tissue boxes.

We like it so much though! The truth is, it’s not only bad for crystals, but also it causes glues. Indeed we learn from our courses, that sugars are part of a big family that have common and different characteristics. 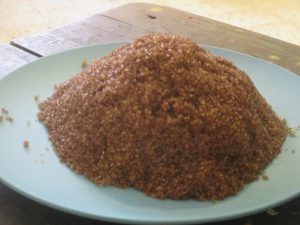 Mucus is usually the result of a diet that is too high in starch. Starch is made up of long chains of molecules that don’t break down properly and usually form mucus. Starches are always plant-based and include potatoes, wheat, cassava, quinoa, lentils, chickpeas, amaranth, Jerusalem artichoke, spelled, millet, barley, and rice.
The crystals usually come from sucrose or regular or cubed table sugar. It is found in large quantities in candies, cakes, cookies, pastries, jams and some drinks.
You now have a better understanding of how sugars can lead to these two types of waste.

Conclusion: Find a Way Out for Them!

Whether it is “glue” or “crystal” waste, it takes an emunctory to eliminate it. Here are the main emunctories:

It can happen that emunctories are blocked, and it is therefore the art of the naturopath to divert toxins to another emunctory. Think traffic jam. When a road is blocked because too many cars are moving soooo slowly, you take an alternate route in order to fly faster, even if it means leaving the highway and taking a secondary road. There’s so much to explore anyways on those small roads, you can even bring a pack of marshmallows along!

The Dream Team: Vitamins B7 and B8