I told you I got my hands on a new “healthy and sweet” cookbook for easy family recipes – so I’m sharing the knowledge. The author is called Avigaïl Meizelik and this week we want to present to you: the Coconut Cookies (or Coco Cookies for short)!

I modified the recipe “a little” according to what I had at home so I give you my version:

So we put all the ingredients in a bowl, mix and place the mixture with a spoon or fork on waxed paper in the oven. After a few minutes (at about 180 degrees) you can already turn the biscuits aside, so that they are golden not just in front but in the back too. After another ten minutes they are ready. When they are ready, either eat them or freeze them!

Here is the result: 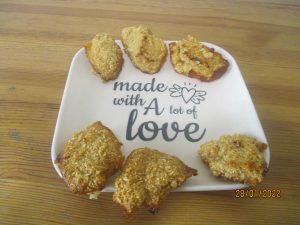 A note on coconut sugar

The original recipe called for coconut sugar. Now what is that?

Coconut sugar comes from the coconut blossom. Sounds cute, but does it make it healthy?

Compared to refined sugar, which provides empty calories, coconut sugar contains vitamins and minerals, including polyphenols, potassium in significant amounts, according to analyzes carried out in the Philippines.

It also contains a form of prebiotic called inulin, which is beneficial for the intestinal flora. Sounds smart, but does it make it healthy?

Coconut sugar has a GI of 35, which is low. This is much lower than table sugar, which has a GI of close to 60. Unfortunately, this data was revised by european groups and the real GI is closer to 54, which is not so great.
Anyways the conclusion about coco sugar is:
Admittedly, it has more minerals than white sugar, but in the end it causes much the same problems. Consume it sparingly, the best being to do without any type of sugar on a daily basis.
Regular and excessive consumption of ordinary sugar can disrupt satiety, lead to excess weight and diabetes through excessive insulin stimulation, impair immunity, increase oxidative stress and glycation, and possibly promote cancer development. The same problems can be expected with coconut sugar, for the same consumption.

The Future of Nutrigenetics: Testimony of a Previous Student

Nothing Short of a Miracle

How I Dealt with my Being Overweight