Right off the bat, let me tell you that if we follow the order of the AMCC Aromatherapy Course, we have to talk about Ravintsara. But we already have a great and popular post on the subject so I’m referring you to it. Have a read!

Now, let’s talk about our Bitter Orange. It doesn’t sound like a sweet subject, I agree. But let’s explore and maybe we’ll be seduced.

For the scientific people among us, the latin word for that essential oil is Citrus aurantium ssp aurantium (yes, they write it twice in the same name). I wanted to avoid the eye sore by not including this version of the name in the title. Bitter Orange Leaf shall suffice.

So why is it part of the AMCC’s Aromatherapy Home Survival Kit?

This essential oil is diffused in places in the home where people are subject to stress. Right now, with all the confinements going on, you could say all rooms of the home is subject to some nice diffusing. It is also inhaled to obtain a sense of relaxation and harmony. Need a break? Have a sniff! Just make sure not to get your nose too close to the opening of the bottle, so the oil won’t get soiled!

It seems it’s also the right oil for broken hearts. I’m not sure how it can mend them, but at least it can calm the mind. You won’t find love in a bottle!

In traditional Chinese medicine (TCM), the combination of the aqueous extracts of the fruits of Gardenia jasminoides Ellis, C. aurantium, 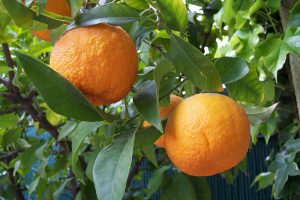 and the bark of Magnolia officinalis Rehd. et Wils. is called Zhi-Zi-Hou-Po (ZZHPD) and has been used to treat depression-like symptoms.

From a scientific research published in 2018 on the subject, the essential oil of C. aurantium was reported to display marked pharmacological effects and great variation in chemical composition depending on growing locations. It mostly contained limonene, linalool, and β-myrcene. Phytochemically, C. aurantium is rich in p-synephrine, an alkaloid, and many health-giving secondary metabolites such as flavonoids. Animal studies have demonstrated a low affinity of p-synephrine for adrenergic receptors and an even lower affinity in human models.

Due to the prohibition of Ephedra sinica Stapf. in Farw.-containing weight loss products in the market, C. aurantium has found an important place as a preferable agent to replace ephedra, as it contains p-synephrine, a phenylethanolamine type alkaloid, which is chemically similar to adrenergic agents, as appetite suppressants.

Among the diverse chemical components in C. aurantium, flavonoids belonging to phenolics have been recognized as important due to their physiological and pharmacological role and their health benefits. Flavonoids were shown to prevent cancer cell infiltration and localization to the lungs.

p-Synephrine, alone or in combination products, was demonstrated to enhance metabolic rate and energy expenditure and to promote weight loss when given for six to 12 weeks

How Does Aromatherapy Work?

I like to sprinkle my articles with general or specific questions not related to our subject at hand. I hope it’s ok with you. Today, we’ll deal about aromatherapy in general. How does it work?

Inhaling essential oil or absorbing it through the skin transmits messages to the limbic system. This region of the brain helps process emotions and regulates the autonomic nervous system, which is responsible for things like heart rate, blood pressure, respiration, and gut motility.

That’s how it can help treat or prevent the following health conditions:

Native to eastern Africa, the Arabian Peninsula, Syria, and Southeast Asia, bitter orange now is grown throughout the Mediterranean region and elsewhere, including California and Florida.
Bitter orange has been used in traditional Chinese medicine for indigestion, nausea, and constipation.

One last paragraph on scientific study for this Bitter Orange Essential Oil:

Wolfenbuttel et al. investigated the influence of C. aurantium essential oil on melatonin and corticosterone in mice after inhalation for 30 min. Melatonin provides protective effects on neuronal cells and acts as an antidepressant by restoration of corticosterone levels. After treatment, the hormone levels did not present variation, whereas behavioral tests showed that the inhalation of 10% essential oil causes an anxiolytic-like and sedative effect. From these data, Citrus essential oil represents a valuable tool for the treatment of the anxiety disturbs, apparently without interference with melatonin and corticosterone physiological levels.

This plant comes from China.

It is diffused in places where people are subject to stress; it is also inhaled to obtain a sense of relaxation and harmony.