Dear friends, welcome back to our series on Bach Flower. We’re starting 2022 with Honeysuckle, as you can see a very nice flower indeed.

This remedy is part of the group “Not Really Connected to the Present” which really all of us can be included in but we’ll see who can benefit the most from this flower. 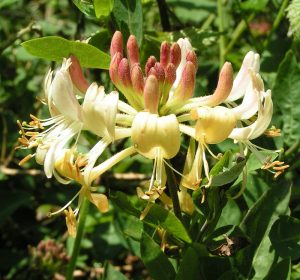 As Dr. Laure, our tutor, used to say : “Let the power of the flowers take hold of you!”

You get the picture: because honeysuckle state means = not connected to the present, then the consequence is of course that she or he can’t live his or her life fully!

It could be as we said, because the person is homesick. Or it could be she lost someone dear, someone close. Or he could have lost his job and position.

Even in certain cases of mental illness, with sentimental visions of the past which cling to the person incessantly … Honeysuckle can be of use.

In the Words of Dr. Murphy

I am used to quoting Dr. Bach, who after all “invented” the Bach Flower remedies, and I will come to them immediately, but first I present to you Dr. Murphy whose homeopathic matiera medica, includes Bach Flowers … Thank you to the Vision program team who kindly provided access to the AMCC team, and where we find all the resources – repertories and much more, at the click of a mouse.

In a honeysuckle state, the mind dwells on past memories. Reminiscences and nostalgia carry more fascination than the colorless present. In fact, in the honeysuckle state, one sadly believes that the happines of the past can never be repeated in the present or future and one hangs on to it.
sadness is the predominant emotion, yet it is tinged with cherishing something lost.

Longing to relive former happiness. there’s also hopelessness and resignation in regard to present and future. These feelings are often in old age when the losses cannot be replaced in this life. the children have moved on, one’s health is fading, the partner may be dying.

In the words of Dr. Bach

Well, there is not much new now, we have already described a lot of things, but here is:

Those who live much in the past, perhaps a time of great happiness, or memories of a lost friend, or ambitions which have not come true. They do not expect further happiness such as they have had.

– The Twelve Healers and Other Remedies

For children who live in the past when they felt happier than they do now, often because of a traumatic family event. Also effective for the kid who misses his family.