We refresh our blood with a revitalizing seaweed cure.

What can’t I find while walking in front of the freezer at the natural store near me? A cute little box full of frozen mini-packets of spirulina. I admit I didn’t even look at the price and bought it. We can always put it down to work because I wasn’t going to miss the chance to write about my find …

We are told in course # 231 of the AMCC – Health Education (for those interested): “spirulina is the blue-green algae of the Aztecs.

Indeed, it grows in the alkaline lakes of Mexico but also in Africa and the West Indies. Claim to fame: it is the first known source of vitamin B12 (more than chicken liver – ha!) In addition to containing exceptional protein contents: 60 to 70% against 35% for yeast or 18 to 20% for fish and meat. To put this information into context, the average rate of assimilable proteins is 15%. With nori the rate is 20%, 35% for wakame and 70% for spirulina!

In case you were wondering, its intake of high-quality provitamin A is far superior to that of carrots and apricots. I admit that I did not ask myself the question but it’s good to know.

It’s used as a natural appetite suppressant these days … so if you’re like me and the amounts aren’t always easy to control, a small dose of spirulina puts your priorities back in place. Its compounds (which, I don’t know) inform the brain that it’s good, we can stop eating, we have enough amino acids …

Athletes use spirulina as a protein supplement. Does anyone with athlete’s foot fall into this category? 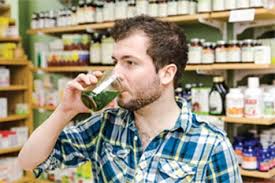 It is also a general revitalizing agent (the subject of this article, let’s not forget) and … ultimately … it acts as an anti-anemic.

So What Does Spirulina Cleans in the Spring?

First, let’s know that the chlorophyll contained in spirulina (115 mg / 100 g) has a purifying action on the digestive tract.

So we can cleanse the body, say twice a day, for a total period of 3 to 6 weeks. Each time we will consume between 3 to 9 teaspoons (that’s 6 on average) of algae, like spirulina for example, but there are others. We suggest doing the revitalizing cure four times a year, with the change of seasons …

Watch out for those who are sensitive to iodine or have thyroid disorders … it is contraindicated for you.

Ideally, you should consume fresh seaweed. Hmmm … the reader who has access to fresh seaweed should give me a sign (from Japan perhaps?). If this is your case, you the Japanese Internet user who reads this blog, we recommend to soak your algae full of sand in water, to clean them. It seems that it takes away the odor and the questionable taste.

Other consumption options for city dwellers among us:

Sprinkled on food, in sauces, in fruit or vegetable juice cocktails, in yogurt, etc.

In my case, I made a GREEN smoothie with only GREEN foods, except a banana, because frankly for the taste we’ve seen better.
So I put (from memory):

In short, I was the only one in the family (of 6 souls) as you can imagine, to consume this smoothie. My neighbour also inherited a drink or two because what am I going to do with all this green drink? It isn’t efficient for very long. She didn’t get back to me on that: no news, good news?

A Cousin Not Too Far Away

Klamath: A close relative of spirulina, klamath grows in the saline lakes of Oregon. It is considered to be a kind of “super spirulina”, particularly rich in bio-catalytic microelements. It appears that one gram of klamath provides 133% of the recommended daily dose of vitamin B12; the rare presence of bore, useful in preventing water retention, molybdenum, a cofactor of iron binding (with vitamin C), as well as fluorine, make klamath a very valuable algae for people suffering from anemia, fatigue, stress or weak immune defenses.

Seaweed has a long list of properties and is effective in treating the following conditions (if you don’t want to read the list, it’s long- I get it. To make it short: it covers about all the problems existing on earth, save maybe for Corona, but it just hasn’t been proven yet).

Algae, when combined with grains and vegetables, meet the requirements for essential amino acids and improve the level and quality of protein supplies (as we have seen, beyond that of meat).
Two thirds of the plasma contained in algae concentrates the bio-available seawater (fancy word which means “assimilable by the organism”). The trace elements are present in exceptional proportions, in particular iodine (up to 1%, for less than 2 mg / liter of sea water), sulfur, copper, silicon, tin, rubidium, silver, gold, lithium, zinc, vanadium, etc. the entire periodic table is there! Anemia, growth disturbances, skin conditions, fatigue, anorexia, and insomnia are all conditions that can be treated by consuming seawater.

For vegetarians: with seaweed, getting protein is therefore easier than ever! Sea water … so simple… could that be the secret to better health?

This is a question received by our tutor here at the AMCC, Dr. Vania, from a student for course #445 Orthomolecular Approaches:

QUESTION: Regarding spirulina, I thought it should be ruled out in cases of autoimmune disease?

ANSWER: You are right. Among the indications for spirulina (p. 209), there is “stimulation of the immune system”. However, in autoimmune diseases, such as lupus and multiple sclerosis, the immune system attacks healthy parts of the body. By stimulating it, we therefore stimulate this attack.

Juicy Shortcut to Health and Vitality