To get the iron you need, it is not enough to eat spinach – and iron from plants is (in general: see my article on spirulina!) less bio-available (absorbed) than that from animals. The modern diet gives us about 20mg per day of iron, and we leave 1mg per day down the drain when we answer nature’s call, which gives us … a pretty good average. So, in general, modern society doesn’t allow for iron deficiency.

So where does this well-known anemia that we hear so often come from?

Given the lack of hemoglobin and therefore the oxygen transport which is not done as it should, we observe:

A poorly understood symptom that is sometimes observed is pica, the bizarre and compulsive consumption of ice, dirt or other abnormal substances. My son when he was younger started biting (metal) chair bars! After his diagnosis I understood why …

Be careful though to monitor blood levels because a lack in babies can mean later down the road:

In Prevention of Anemia

So for babies and children, it is strongly recommended that you NOT give cow’s MILK.

We can also give iron supplements to children who are breastfed (we hope all are breastfed, there is nothing better for them!) If the child begins to eat cereals, some are fortified hell. Subsequently, we will choose a menu (therefore from 2 years old) that includes a lot of elements rich in iron, or even vitamins (without sugar!) Fortified in iron.

To promote the absorption of iron in the body: our friend vitamin C. Avoid calcium at the same time as iron because it decreases its absorption!

It would be lying to you to tell you that a magic remedy can cure our Anemia … there are several in homeopathy which have been proven, but you must always individualize the remedy. Take for example:

I would discuss a little more about Ferrum metallicum (Ferrum met) which has been taken by several unsuspecting homeopaths as THE remedy for anemia, when in fact, no … you always have to analyze the person and his symptoms as a whole. I send you a warning written by one of the greats of homeopathy (he died a while ago) EB Nash:

I must here state my experience founded on abundant practice and observation that such prescribing is not only un-Hahnemannian, but in every sense un-homeopathic, and I warn all beginners not to practice along that line.

Basically: do not think that in homeopathy a single remedy is suitable for a diagnosis or a symptom, or as usual, a mixture of remedies for the common cold, say. It’s not homeopathy!

See how characteristic it is?

Do you see the individualization? They are two different worlds, so how could one remedy cure each other’s anemia!

Holistic Nutrition: Another Weapon Against Anemia

It is not only homeopathy that can cure anemia – or at least there are some temporary options out there, like we saw above the need sometimes to take iron supplements (it is still necessary to choose one that do not have side effects).

For example, consuming Alfalfa can help you fight hemoglobin deficiency – see Chinese medicine for this explanation: 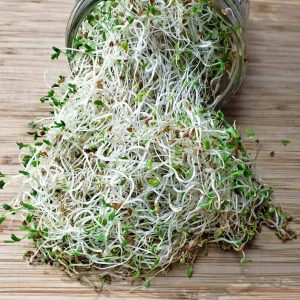 The alfalfa acts on the element Earth with a potential Yang; this is why it will be used for example in cases of anemia which is a state of Rate Yin (Earth) in order to stimulate it. The purpose of consuming alfalfa is to correct anemia which is a deficiency in hemoglobin.

We also suggest in our course # 142 Nutrition Basics the following nutritional advice in case of anemia:

So you see, your enemy is not necessarily anemia per se, it could be your laziness to not take the proper course of action!