Home » Archives » Homéopathie » A Cockroach in my Coffee?

Here it is, with the theme of insects, a story that will hold your attention. This is a well-known homeopathic remedy for asthma: Blatta Orientalis and the story of its discovery.

Once upon a time in India…

An old man had suffered from asthma for almost 20 years. One afternoon, he realized that he felt much better after having his usual tea. He no longer felt tightness in his chest all of a sudden! He had no choice but to attribute this change to the tea even though it had never helped him before. He summoned his servant and asked him to bring the pot of tea. Inside, he saw the cockroach… In just a few days, the old man’s asthma was gone!

He and his friend began to collect cockroaches and put them in boiling water. They filtered the water, added wine and created a mother tincture. The dose was one drop, 3-4 times a day and more often in an attack in the asthma cases they encountered. Gradually there were so many healings that people with asthma came to see him from all over the country! (This story is reported in Anshutz New, Old anf Forgotten Remedies)

As the cockroach is active in principle at night, asthma problems related to this remedy are more present at night. Also, the cockroach is present in humid environments and close to the ground, and as a matter of fact this remedy is given to a patient whose illness is aggravated by humid weather. 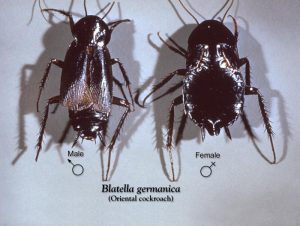 The cause of his asthma is very often dust, as for example in the case of Mr. K who worked in a hospital parking lot and he ingested a lot of dust from cars. This caused him asthma for almost 15 years, until he took two granules of the Blatta Orientalis remedy.

Too bad most people (including children) who suffer from asthma are content with an inhaler and steroids… with all the side effects and the lack of a total cure as a bonus.

Confirmatory symptoms for choosing this remedy include: difficulty breathing, coughing, choking, lungs won’t open, flu symptoms, chronic fatigue, ect. .. This looks like some cases of COVID and these could therefore, according to Elaine Lewis Homeopath, be settled with Blatta Orientalis, to be checked on a case-by-case basis.

Rhus-Tox and Friends: Sensitive to Rain